Bystanders in Milan got a shock the other day when the turret of a submarine appeared out of nowhere one morning, seeming to have erupted through the paving stones on the Via dei Mercanti. They were even more bemused when sailors appeared at the top of the turret and were helped to safety by Italian firefighters. Of course, it wasn’t long before the truth emerged – that this was a guerrilla marketing tactic, a stunt, employed by an Italian insurance firm as part of their latest campaign. For me, it was a breath of fresh air.

I’ve become so used to digital being the be-all and end-all (according to some) that a campaign somehow isn’t worth the money spent on it unless it’s happening on a screen somewhere. I was pleased that this professional services organisation (the sort you’d expect to play it safe with a press ad) had had the courage of their convictions to create something so alive that people couldn’t help but stand there and stare (as did the world’s press). It just goes to show that the art of bringing ideas to life can happen anywhere at any time. Even on a street no-one’s ever heard of in Milan. Viva Italia! 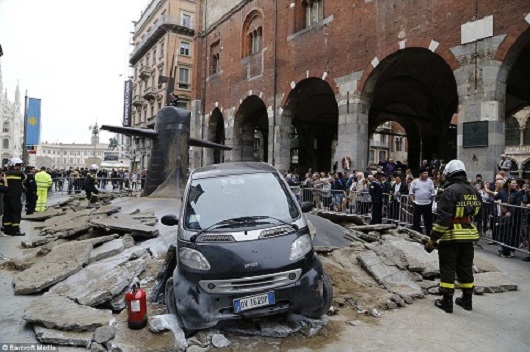