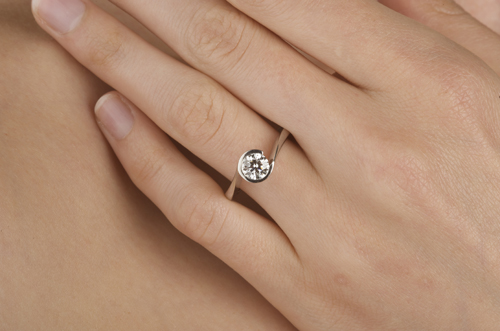 Award-winning contemporary British jeweller Nicholas James’ latest research reveals that consumer confidence in purchasing the right engagement ring has not been affected by the recession.

The survey, carried out earlier this year among a mixture of men and women, found that a significant 78% would spend upwards of £2,000 on the right ring (with 20% of these happy to spend over £4,000). Interestingly, this correlated with the sums spent by couples who had already purchased the ring.

What’s more, 67% of those admitted they had exceeded their initial budget. This echoes what comparative studies are showing and confirms that some romantic couples are willing to increase their budget once they start shopping around rather than compromise. (A 2011 survey by industry magazine, Retail Jeweller, revealed similar findings.) This is in stark contrast to other research which shows that overall wedding spend has dropped in the last three years (figures vary but are as high as 25%).

While economising might be popular for some purchases, the couples interviewed were largely adamant that they wouldn’t be willing to do this for the engagement ring. A tiny 7% said they would be willing. For the remainder, there were a variety of solutions: almost a quarter were willing to extend the engagement period; 19% would use their credit card and an impressive 37% would economise on living costs.

Nick Fitch, the creative force behind Nicholas James in Hatton Garden comments: “We commissioned this research to confirm what I suspected – that consumers view the engagement (and wedding rings) as both important lifelong purchases and financial investments. Customers coming to my store are also more educated than ever before about quality of stones and the importance of metal choice.”

An interesting twist for the consumer is indeed the ever-increasing and reliable price of commodities such as platinum and gold, which makes the purchase process more involved and considered than it perhaps was years ago.

For a copy of Nicholas James’ research, or to book an appointment to discuss it in more detail with Nick Fitch, please contact Alison Sweeney on 020 7404 9594 or email a.sweeney@wonderberry.co.uk

To receive an NJ Look-Book, hi-res images or arrange a private viewing or